In the Beginning
The first record of the existence of a Lutheran Church - Missouri Synod congregation in Cedarburg is found in the minutes of a voter’s meeting held on May 22, 1853. It seems that previous meetings had been held before that date but no minutes are in existence. In these recorded minutes of 1853 is reference to a previous meeting in which a resolution was made to conduct a Christian Day School in Cedarburg and Grafton. The resolution states, “The new pastor shall conduct our school during the first half of the year.”

Among the founders of our congregation were names like, Wirth, Groth, Nero, Kannenberg, Bruss, Lauterbach and Pipkorn. Their pastoral leader was the Rev. Frederick Lochner of Trinity Lutheran Church in Milwaukee. Soon Pastor Lochner’s duties in Milwaukee became too extensive for him to serve the needs of the Lutheran congregations of Cedarburg and Grafton. The congregations of these 2 towns joined together to call a graduate from Concordia Seminary - St. Louis to be their pastor. On May 1, 1853, the Rev. Martin Guenther was ordained into the ministry and installed as the first pastor of our congregation. The new congregation needed a new building and in June of 1853, a log building measuring 28 feet by 18 feet was located on what is now Western Avenue and Washington Avenue. 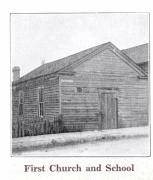 One hundred and forty years ago this confusion didn’t exist. There was one congregation called “Immanuel Lutheran Church.” Then came the split.

It happened in 1862, at the beginning of the Civil War. In his book, Confessional Lutheran Migrations to America, Eugene Camann explains that a rife occurred in the congregation over members who attended a dance. Camann quotes church records, which say, “the pastor demanded public confession of wrong from some members who had attended a dance.” Oral tradition tells us that the dance was actually a wedding reception of one of the members. It seems that the Saturday evening reception, which followed the marriage ceremony, included drinking and dancing. Because communion was going to be served the next morning during the worship service, Pastor Ahner recommended that the revelry be ceased. (In those days communion was offered only once every 3 months. Members would visit with the pastor the day before to announce their intention of partaking in the Lord’s Supper and their desire to amend their sinful life.) Pastor Ahner reminded them of their responsibility to behave with respect since they would partake in the Lord’s Body and Blood in the morning. It is said that after Pastor Ahner returned to the parsonage the party resumed. An elder reported this to the pastor and in the worship service the next morning he demanded public confession. It is said that those of the congregation who were offended at this request later changed the locks of the church and refused the pastor entry the next Sunday. Obviously a split was in the offing.
The small group that remained with its pastor and synod passed a resolution on April 6, 1863, that a new church was to be built in Cedarburg and a new school building would be erected in the Town of Mequon. Since this small group kept the pastor and its affiliation with the Lutheran Church - Missouri Synod, they chose to keep the name. Not long after, to avoid confusion, the small congregation called itself, “First Immanuel Lutheran Church.” The new church building was erected on Washington Avenue. and was later moved to Hanover. For years it housed the “Cedarburg Floral Shop” until it was demolished a couple of years ago.

In 1890 plans were drawn up for a larger church at the corner of Cleveland and St. John Street. This new church was built at a cost of $8,000 and was dedicated in December of 1891. Half of this was paid off in the first year, proving once again that we move “Forward in Faith” with the blessings of Almighty God.

In 1905 electric lights were installed and in 1923 we installed a new pipe organ as well as stained glass windows. In 1950, 40 feet was added to the front of the church to increase the seating to 450. They also had a fellowship hall and modern kitchen built in the basement. In 1990 plans were started to build a new church. It became necessary to have a larger church, which was attached to our school. The old church was sold to St. Nicholas Orthodox Church.

Since 1853, First Immanuel has always had a day school. Classes were first held in church, then in the church basement and finally a two-room school was built in 1929. This building served as the Parish House a little later and now is occupied by an orthodontist. In 1954 plans were made to build a 4 room school on Evergreen Boulevard. Our congregation experienced more growth, so within 3 years we needed to make more additions to the school. Then in 1965 we built more classrooms. When we built our present church in 1992, we again were experiencing overcrowding in the school. We are trying to use every square inch of room we have. We could not do this without the help of all our dedicated volunteers.

Present Day
So this brings us up to the present time. We now have 3,100 members in our church and 450 students in our day school. We conduct 5 worship services every weekend. We have large active groups including: Men’s Club, Ladies Aid, Senior Choir, Bell Choirs, Lutheran Women’s Mission League, Prime Timers, Organization of Parents and Teachers, numerous Bible classes, both on Sunday morning and during the week and numerous youth groups. We were instrumental in starting Living Word Lutheran Church in Jackson and also helped with Living Word Lutheran High School. We also helped start 10 new churches in India with our Outreach Program. We have 18 teachers for K-8 plus math, computer, music, youth ministry and language teachers for a total of 25. Our budget is over $2.4 million annually. To date our congregation has been served by 23 called and ordained pastors.
Community
Voice
Notify Me
Employment
Video
Tourbook
/QuickLinks.aspx
/QuickLinks.aspx