"Flood Protection" & How it Can Help You
In simple terms, 'flood protection' is the action(s) you take to protect yourself, your family, and your property from an excess of water on land that is normally dry. You can decrease these threats, by knowing where flooding occurs in Ozaukee County and what actions to take if you are in a flood prone area. 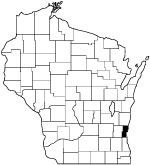 The creeks and rivers that helped form the picturesque landscape in Ozaukee County are an integral part of the natural beauty of the area. They are also subject to periodic flooding. View photos from the Cedar Creek flooding and the Milwaukee River flooding in Saukville.

The first Europeans to view the western shore of Lake Michigan were the French traders, LaSalle and Joliet, in 1670 and 1680. They encountered the Menomonee, Potawatomi, Sac, and Fox Indian tribes of the Algonquin nation living in the area.

Both Indians and early European settlers both recognized that the county's creeks and rivers were the most effective means for traveling through the heavily forested wilderness. The periodic overflowing of local creeks and rivers not only influenced the location of villages but also the placement of the first farms and industries in the county.

As the area's population grew, permanent settlements were established along the county's waterways. Settlements along the Milwaukee River (Thiensville, Fredonia, Saukville, and Grafton); Cedar Creek (Cedarburg); and Sauk Creek ( Port Washington ) could not be relocated when water levels rose. Consequently, the natural periodic overflowing of local creeks and rivers began to be more than an occasional inconvenience, flooding began to threaten the new homes, roads, businesses and lives.

Protecting homes, businesses and transportation networks from the devastating effects of floods is one of the many jobs performed by the Ozaukee County PRLM Department. Through the years as the county's population and economy have grown the county has worked hard to provide individuals and communities with land use plans that should decrease future flooding concerns. It is a continuous and evolving process.