Erosion in the Great Lakes Region

The Great Lakes coast comprises a variety of shore types that range from low-lying coastal marshes subject to flooding to high rock cliffs that are resistant to erosion. Most of the coast, however, is composed of erodible glacially deposited sand, gravel, clay, and a clay like material called till.

On the coast, the forces of erosion are embodied in waves, currents, and wind. Surface water and groundwater flow and freeze-thaw cycles might also play a role. 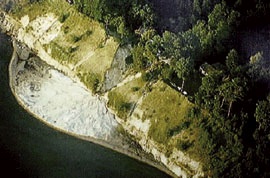 Sand & Till Bluff Shores
The sand / till bluff shore type is most often characterized by an underlayer of a less erodible, more compact material, such as clay or glacial till, overlaid by more erodible, less compact material, such as sand and gravel. Layers of till or clay might also be present in the overlayer. Because of the presence of the compact underlayer, these shore types have been referred to as "cohesive coasts." Because of the variation in depositional environments, the composition and erodibility of cohesive coasts might vary considerably over distances as short as several hundred yards.

Sand Dune Shores
The sand dune shore type generally comprises glacially deposited sands and gravels that have been reformed by winds. Although there are dune shore types that consist entirely of sand, very often the dunes sit atop an underlayer of glacial till. The erodibility of this shore type can be more similar to a cohesive coast than to a dune shore type made up entirely of sand.
Profile of Beach Erosion
This figure presents a cross-section view of a typical beach profile. Erosion occurs within an area roughly from the bluff crest out into the near shore to a water depth of about 30 feet. For erodible sand dune and cohesive coasts, the erosion rate within that area would continue at about the same rate, when averaged over the long term, even though erosion at a specific location in that area, such as the bluff, might increase or decrease, at least over the short term. 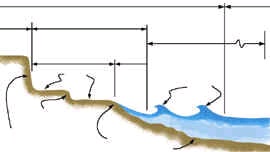 Both sandy and cohesive coasts might partially recover from erosion. The beach might enlarge and small dunes begin to form at the base of the bluff. Over the long term, however, bluff erosion of these shore types is irreversible, as only a portion of the eroded sand ever returns to the beach. There are a few shore types that exhibit sensitivity to changes in water levels, such as those with an erosion resistant shallow offshore shelf, but they are not common on the Great Lakes coast.
Storm & Wave Erosion
The most dramatic erosion often occurs during storms, partially because the highest energy waves are generated under storm conditions. Added to this, storms often produce short-term shifts in lake levels as water is pushed from one side of a lake to the other, called "setup." The effect of storms is also influenced by their duration and return frequency.

"Wave climate" describes the wave characteristics that prevail in a particular region. From hour to hour, day to day, and season to season, wave conditions can vary significantly. 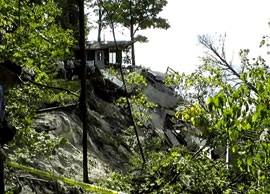 Because water depth partially influences how and where waves will interact with the coastal area, lake levels might have an influence on coastal erosion, though they do not cause it. Naturally fluctuate in response to changing water supplies and weather conditions.

Littoral Transport Process
Erosion is part of a larger process known as littoral transport, the movement of material by waves and currents on the coastline. The material being transported is primarily sand and gravel, with a small percentage of silt-size particles and rocks. The source or supply of nearly all of the sand that is in the littoral transport system of the Great Lakes is from the erosion of the bluffs and dunes. Rivers supply very little material.

Littoral transport occurs along the shoreline as well as into the lake and onto the shore. With respect to sand supply, a given length of coastline might have a surplus, be in balance, or have a deficit in its sand-supply budget. A sand supply would be in balance for a particular area if the amount of sand leaving the area was being replaced by an equal amount of sand arriving from adjoining areas.

Over short time periods, erosion might be followed by a buildup of sand (accretion), but over the long term, the area would be in a state of dynamic equilibrium. A large reduction in the sand supply, or a long-term reduction in supply to an area, creates a deficit in the sand budget that must be balanced, usually by increased erosion.

Influence of Sand Supply
Sand supply influences erosion by providing the material that builds and maintains beaches, offshore bars, and the general beach profile. These features dissipate wave energy, and the absence of these features, where they would normally be present, usually results in increased erosion.

Sea walls or revetments might cut off the littoral transport system from its sand source. Individually, the effects of one or several structures might or might not be noticeable, but the cumulative effect of hundreds of such structures can be significant. Dredging operations might hinder or benefit littoral transport and the sand supply.

Human activities can benefit the sand supply. At many of the large harbors around the Great Lakes, the adverse effect of the large navigation structures on the sand supply has, at least for the last decade or so, been mitigated by the beach nourishment programs at those harbors. Beach nourishment reintroduces sand into the littoral transport system that has been blocked by the navigation structures, thus maintaining a balance in the supply.

Sand Supply Affects Shore Types
In addition to the more obvious adverse consequences associated with narrower beaches, interruptions in sand supply have a significant impact on the sand dune and cohesive shore types that make up most of the erodible coastline of the Great Lakes. For sand dune shore types, a reduction in sand supply to an area is generally accompanied by an increase in erosion. This usually occurs to the bluff, the primary sand source.

The coastal area attempts to adjust to the erosion that occurs in the near shore, with the erosion gradually progressing to the beach and bluff in a process termed profile adjustment. This adjustment process might take years or decades to complete. If the interruption in sediment supply is severe enough or if the sediment shortage cannot be made up, the coastal area might never fully adjust and erosion might increase significantly.